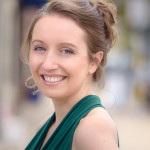 Christina Kay is a versatile singer and teacher with a particular enthusiasm for concert, early, and new music repertoire. As a professional chorister who has sung in choirs since middle school, she is excited to share her love of choral singing with the students at Highbridge Voices. Before moving to New York City, Christina spent over four years performing and teaching voice and piano lessons in Wisconsin, where she maintained a studio of 40 students of all ages.

Christina has sung with many professional ensembles including American Classical Orchestra, ARTEK, Carmel Bach Festival Chorale, Fifth Avenue Presbyterian Choir, Madison Choral Project, Marble Collegiate Sanctuary Choir, Present Music’s Hearing Voices, and The Salvatones. On the opera stage, she recently appeared in Petr Kotik’s Master-Pieces with S.E.M. Ensemble, and in John Cage’s Song Books at New Opera Days Ostrava in Czech Republic. In Wisconsin, Christina enjoyed a number of collaborations with Fresco Opera Theatre, including premiering the role of Young Clara in a new dramatic production about Clara Schumman. She also appeared with Fresco as Gretel in a family outreach production of Hansel and Gretel, and as a Mermaid-Alien in a Star Wars-themed Rinaldo. Other roles include Dalinda in Ariodante, Second Woman and First Witch in Dido and Aeneas, First Spirit in Die Zauberflöte, and Mrs. Segstrom in A Little Night Music.

Originally from Harrisburg, Pennsylvania, Christina holds a Bachelor of Arts in Music from Gettysburg College/Sunderman Conservatory, and a Master of Music in Vocal Performance from University of Wisconsin-Madison. In addition to singing around the city and teaching at Highbridge, Christina is the booking manager for Asaran Earth Trio, a New York City-based world folk band.