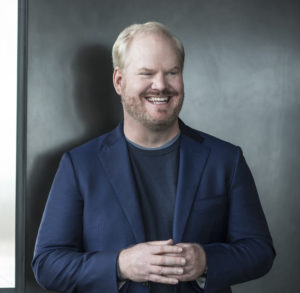 Jim Gaffigan is a three-time Grammy nominated comedian, actor, writer, producer, two-time New York Times best-selling author, Pollstar nominated, top touring performer, and multi-platinum-selling father of five. He is known around the world for his unique brand of humor which largely revolves around fatherhood and his observations on life.

Releasing April 6th, Gaffigan takes a dramatic turn in Entertainment Studio’s, Chappaquiddick, opposite Jason Clarke, Ed Helms, Bruce Dern and Kate Mara. The film follows the story revolving around Senator Ted Kennedy (Clarke) and the tragic car accident that took the life of Mary Jo Kopechne (Mara) in 1968. Gaffigan plays District Attorney Paul Markham, who was on the island of Chappaquiddick during the accident and helped Kennedy with the cover up. The film premiered at the Toronto International Film Festival (TIFF) this year and was immediately acquired by Entertainment Studio’s for $20 million.

Gaffigan, who is one of the world’s highest grossing stand-up comedians according to Forbes, is currently on his Noble Ape international arena and theater comedy tour, with dates in China, Japan, England, Canada, Paris, Denmark, Sweden, Norway, Finland, Iceland, etc. Last year, he premiered his fifth one hour stand up special, Cinco, on Netflix, who also purchased the exclusive rights to Gaffigan’s four other stand-up specials in an unprecedented deal. The album version ofCinco, Gaffigan’s fifth album, became available on June 13th and during that week, Gaffigan had 6 albums in the top 10 comedy albums list on iTunes. Cinco garnered impressive reviews, with A.V. Club calling Jim, “One of our most intelligent observational humorists.”

Premiering at SXW this year, Jim stars in Cold Iron Pictures’ and Imagine Entertainment’s comedy, You Can Choose Your Family. In the film he plays a seemingly normal father of a loving family whose home life is hilariously turned upside down when his 17-year-old son discovers that his dad has a second family. The film is directed by Miranda Bailey and produced by Ron Howard, Brian Grazer, Karen Kehela Sherwood, and Amanda Marshall.

Gaffigan’s other upcoming films include the Bron Studios comedy, Drunk Parent’s (Alec Baldwin, Salma Hayek) and the leading role as the voice of “Peng” in Original Force Animation’s Duck Duck Goose. Gaffigan will soon begin production on the dramatic thriller, Them That Follow, joining Walton Goggins in a screenplay about a small community in Appalachia where believers handle poisonous snaked to prove their righteousness before god. Gaffigan will play Zeke, the pious, steadfast husband of the community matriarch.

In 2016 Gaffigan and his wife, Jeannie, ended their critically acclaimed semi-fictitious television show, The Jim Gaffigan Show, after two seasons on TV Land. The series, lauded by The Los Angeles Times as “Fun and Funny,” and People Magazine as “One of Summer TV’s bright spots,” was written by Jim and Jeannie who both also served as executive producers and showrunners. The single-camera comedy co-starred Ashley Williams, Michael Ian Black, and Adam Goldberg and revolved around one man’s struggle to balance fatherhood, stand-up comedy and an insatiable appetite.

In December of 2014, Gaffigan became one of only ten comics in history to sell out Madison Square Garden and a few months prior, Gaffigan had the honor of performing for Pope Francis and over 1 million festival attendees at the Festival of Families in Philadelphia. In 2016, Forbes named Jim as one of the world’s highest grossing comedians. Additionally,streaming site Pandora recently announced that Jim is the most popular comic among its users with over 700 million spins to date.

Along with Cinco Gaffigan’s first four specials include Beyond the Pale -2006, King Baby -2009, Mr. Universe -2012 and Obsessed -2014. Obsessed premiered at #1 on iTunes which marked the fifth time Gaffigan reached the Top 25 Comedy category on iTunes. The album also earned a nomination for ‘Best Comedy Album of the Year’ at the 2015 Grammy Awards.

In addition to his own television show, widely popular stand-up comedy and best-selling books, Jim has guest starred on many television comedies and dramas, ranging from “Portlandia” and “The Unbreakable Kimmy Schmidt” to HBO’s cult hits “Flight of the Concords” and “Bored to Death” to dramatic roles in all three versions of “Law & Order.” On the silver screen, his credits include Three Kings, Hot Pursuit, Super Troopers, and 17 Again amongst many others. Gaffigan costarred Peter Sarsgaard and Winona Ryder in Magnolia Picture’s 2015 drama, Experimenter.

Gaffigan currently lives in Manhattan with his wife Jeannie, and their five children.