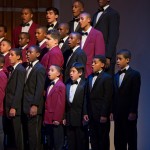 The Highbridge Voices Winter Concert was held on December 13, 2013 at 7:00 pm and offered several exciting new developments from previous years. For the first time, the concert took place in Manhattan at St. Peter’s Church on Lexington Avenue. This exciting change allowed Highbridge Voices to be at the center of the holiday hubbub in midtown. In turn, fans and supporters from the city could take time out of the busy week to enjoy the beautiful sounds of children’s voices. In St. Peter’s beautiful, modern sanctuary, the combined Concert and Chamber Choirs began the performance “in the round”, filling the balcony area and surrounding the audience on the main level to sing the African lullaby “Allunde Alluya” in Swahili. The students then processed up to the stage for “Cuncti Simus”, sung in Latin, which featured several soloists and percussion accompaniment.

The Concert Choir continued with their portion of the program, under the direction of Ms. SunHee Lim, who has had a terrific semester in her new position as Assistant Music Director. Her talents and skill were evident, as the seventy-voice Concert Choir, with thirty new members, came together for a performance that was musical and artistic. The choir performed “Something Told the Wild Geese” by Sherri Porterfield, a Hebrew song telling of what the new year will bring called “Bashana Haba’ah” and the jovial “Sound the Trumpet” by Henry Purcell. Liana, a new Concert Choir student, admitted she was “pretty nervous” about getting on stage to sing for a bunch of people, but she also knew that they were ready to “show off what [they] learned over the past ten weeks.”

Under the direction of Mary Clementi, the Chamber Choir offered “Laetatus Sum,” sung in Latin, Daniel Gawthrop’s moving “Sing Me to Heaven” and finished their set with the wonderful spiritual “Rise Up, Shepherd, and Follow” arranged by André Thomas, featuring soloist Precious Agbo. The combined choirs ended the concert with Bruno Casolari’s arrangement of “Sleigh Ride”, which has become an annual tradition. Singing to a full house in a new venue, the young singers enjoyed a standing ovation from their enthusiastic audience of family members and supporters.

Following the performance, it was time to celebrate! The singers ate a hearty meal, generously donated by BRGuest Restaurant group and the audience was invited to a dessert reception. As the first performance of the calendar year for Highbridge, the Winter Concert is often significant in building connection between all the members of the Highbridge family, and this year’s performance provided a strong start to another wonderful year of music making.