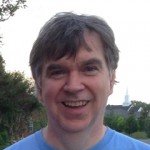 Highbridge Voices is very happy to welcome pianist David See to its team of highly talented musicians. David was adjunct professor of composition and staff accompanist at Middle Tennessee State University from 2005-2014. After graduating with a Bachelor of Music in Composition in 1979 from the Oberlin Conservatory of Music, he spent ten years in New York City as a free-lance musician, and then for 25 years resided in Tennessee (Johnson City and Murfreesboro). He was worked variously as teacher, collaborative pianist, organist, electric keyboardist and composer/arranger.

He taught piano at Suzuki Talent Education of Appalachia in Kingsport TN from 1989-2005, and for most of that time was also principal keyboardist with the Symphony of the Mountains. He wrote the background music for the “Don’t Touch That Dial!” Radio Theater presentations on WETS-FM Public Radio from 1993-96. He has written a series of pieces for two pianos which are often performed with his wife Lynn Rice-See, as well as a series of arrangements of jazz standards for flute and piano. He now lives with his wife Lynn in Washington Heights.